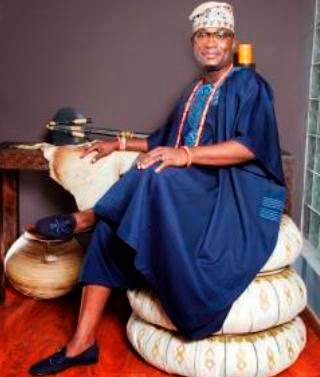 
And the recepient is federal lawmaker on the rise, Dayo 'Bush' Alebioshu.

Here are full details of the upcoming happenstance many look forward to as made available to naijacelebrities.net

''In a matter of days, precisely January 25, the ancient town of Ijebu-Ode will welcome the high and mighty in the Socio, Economic and Political Firmament of Nigeria as the Paramount Ruler of Ijebuland,; HRM Sikiru Adetona (CFR), the Awujale of Ijebuland will confer the distinguished title of Otunba on some members of the royal family.

One of the new Otunbas is a blue-blood from the Gbelegbuwa Ruling House. He is Hon. Ekundayo Adedeji Bush-Alebiosu, a 2-Term Member of the House of Representatives who chairs the House Committee on Treaties and Agreements.

'Hon. Bush-Alebiosu whose parents-Otunba and Otunba (Mrs.) Busura Alebiosu have been Otunbas of the Awujale since the ‘80s will be conferred with the vacant Royal title of ‘Otunba Fuwagbuyi of Ijebuland’,a position that was last held by a foremost Statesman and Legal Practitioner Par Excellence, Otunba Adeniran Ogunsanya (SAN) who passed away in November 1996.

Just like the proverbial ‘Golden Fish which has no hiding place’, the Federal Lawmaker’s strides at the ‘Green Chamber’ may not have gone un-noticed as the revered monarch and the council decided to honour the Legislator whose passion for people-centered and welfarist bills such as the Tobacco regulation and Control Bill, regulation of consumption of caffeinated energy drinks, Air Passengers’ Rights Bill and several motions as well as his cerebral and robust contributions to debates and legislative activities remain a landmark among his peers.


'Next time you see the Federal Lawmaker, the ‘Otunba’ title now comes before the Honorable, who is fondly called ‘D-Bush’ in the political and social parlance.'
Posted by MAN ABOUT TOWN at 8:37 AM