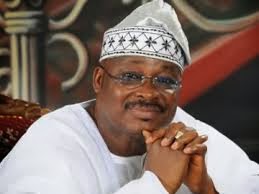 
Here is a reproduction of trending report of the development

'Happy at the conduct of the civil servants, their proper dressing, as well as their dedication and commitment to duty in the past year, Ajimobi said they deserved to be compensated.

Consequently, he announced the donation of N10 million to all the civil servants who turned up for the prayer service, while all the workers of the State Water Corporation were given N5 million for beating the time frame given to them to complete the rehabilitation of the Asejire Waterworks abandoned about 17 years ago.

Also, Mrs. Margaret Olatoun Oluwafemi of the State Printing Press and other staff of the corporation were rewarded with the sum of N250,000 each for the quality of the printing of the programme for the prayer service.

Besides, another civil servant, Mr. Oyelola Okunlola, of the Office of the Surveyor-General of the State got the sum of N100, 000 for appearing well-dressed at the occasion.
The governor, who said that all the donations were from his personal purse, emphasized his knack for quality, stressing the need for civil servants to always settle for the best.

'He said, “I am a man of quality. So I urge you never to settle for less but to always have positive mental attitude towards service. Not only that, you must also inculcate it into your children.”
On salary review, Governor Ajimobi disclosed that a committee would be constituted this month to fashion out a wage that would be acceptable to the generality of the workers.

Governor Ajimobi, however, stressed the need for the workers to redouble their efforts towards improving on the internally-generated revenue of the state.

In their sermons, Dr. Segun Olatunji, a pastor of the Redeemed Christian Church of God and Sheikh Ahmad Rufai, the Chief Imam of Government House Mosque, commended the commitment and dedication of the civil servants, urging them to continue to reciprocate government’s gesture by renewing their cooperation and support to the government.

They also called for unity among members of the political class to ensure the success of the Ajimobi administration and for the state to continue to move forward.'
Posted by MAN ABOUT TOWN at 2:43 AM