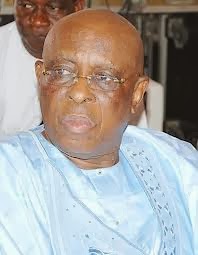 State leader of All progress Congress, Segun Osoba and Federal lawmakers operating under the platform of the party have distance themselves from moves to adopt Ogun state Governor, Ibikunle Amosun for 2nd term.


The stake holders refused to attend a meeting called towards this end.

Here is trending report on this development

'Former governor of Ogun State, Chief Olusegun Osoba, and members of the All Progressives Congress representing the state in the National Assembly on Monday shunned a meeting called to adopt the incumbent Governor Ibikunle Amosun for a second term.

Osoba, who is also a national leader of the ruling APC, along with the three senators and seven members of the House of Representatives in the National Assembly, failed to show up at the meeting.

'Amosun, had through his Senior Special Adviser on Political Matters, Tunji Egbetokun, invited National and state assembly members and local government councillors as well as party chiefs to a stakeholders meeting at the June 12 Cultural Centre, Kuto, Abeokuta.

The former governor and the federal lawmakers however stayed away from the meeting, where a mild drama ensued as a faction of the APC in the state adopted Amosun for a second term.

The party leaders declared their loyalty to Amosun, soliciting the people’s support for his administration.'
Posted by MAN ABOUT TOWN at 2:54 AM