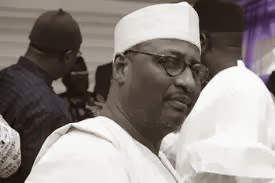 The candidate of the First Lady, Dame Patience jonathan's - with tacit support of husband, President Goodluck Jonathan- to replace Alhaji Bamanga Tukor has Chairman of political Party, People's Democratic Party has been rejected.


In his stead, a consensus candidate, Adamu Mu'azu, former governor of Bauch state has been chosen.

Here are trending reports that captures the happenstance

' Dame Patience Jonathan, wife of Nigerian president is not excited that her candidate Mohammed Wakil was turned down as new PDP chairman.

Following the exit of the embattled chairman of the party, Alhaji Bamanga,a meeting was convened yesterday to decide way forward. A former governor of Bauchi state, Alhaji Adamu Mu’azu,has been appointed as the new chairman of PDP.

'Gistmaster gathered that Jonathan and his wife, patience tried to get Wakil, their candidate to the position but it was rejected. Sources at the meeting said Wakil was rejected because some of them allege he did not carry people along when he was principal officer in the house.

The profile of Adamu Mu’azu shows that he was born in 1955,and he was governor of Bauchi state between 1999 and 2007. He was succeeded in office by Isa Yaguda.

'The new PDP chairman has a Bachelor’s degree from Ahmadu Bello University, Zaria,Kaduna state.
As governor of Bauchi,Muazu was accused of corrupt practices. He was accused of stealing close to N20 billion Naira while in office.'

According to a report published today in one of Nigeria’s national newspapers, Mu’azu was said to have been selected as the consensus candidate after t a meeting between President Goodluck Jonathan and the governors of the party at the Presidential Villa in Abuja, yesterday.

At the meeting which was reported to have ended at 1:22 am this morning, it was revealed that majority of the governors in attendance had rejected the choice of Mohammed Wakil by the President and his wife, Patience lamenting on his alleged inability to carry people along when he was a principal officer of the House.'
Posted by MAN ABOUT TOWN at 3:26 AM